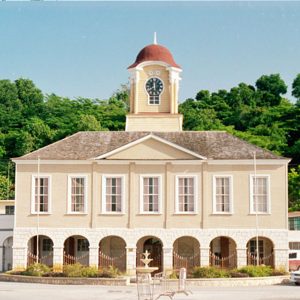 There are no available car for this location, time and/or date you selected.

There are no available activity for this location, time and/or date you selected.

Total: No activity found .    view all

Hanover, Jamaica’s third smallest parish (after Kingston and St. Andrew), was founded in 1723. Lucea is its capital and main town. From the middle of the 18th century, the people of Lucea provided the rest of Jamaica with most of its produce but mainly exported bananas until the 1960s.

Fort Charlotte in Lucea was built in 1761. Alongside the fort is an impressive Georgian brick structure known as The Barracks, which was built in 1843 to provide shelter to the soldiers stationed there.  In the early 20th century The Barracks became the educational center for the town and has now been transformed to become part of the Rusea High School complex. In 1982 Rusea High School was merged with the Hanover Secondary School and is still known as the Rusea High School (Fort Charlotte). In May 2014 the school was still open and open-air lessons took place inside the fort.

The parish has three small waterfalls, several coves, such as the Davis Cove, named after a prominent Hanover family, along its coastline and large caves.  The still fully functional Lucea clock tower was built in 1817 and stands in the town center near the Old Lucea courthouse.

Other notable tourist attractions are Lucea’s many historical sites that date back as far as the 18th century. Lucea Parish Church (the Parish Church of Hanover) is one of the oldest churches in Jamaica. Although no record of when it was first built exists the first baptism record dates back to 1725, the first burial was in 1727, and the first marriage in 1749. It is said that there is a tunnel that leads from the church to nearby Fort Charlotte, which was a safe haven in time of war. The Hanover Museum sits on the site of a prison dating back to 1776, and houses many historical artifacts significant to Hanover’s history.